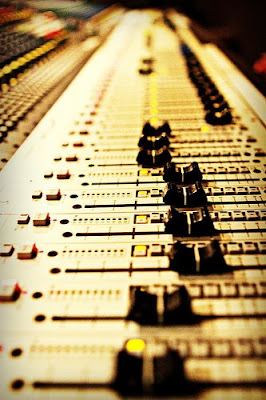 I had an unusual view this weekend: Covenant Life Church from behind the FOH mixing console. I haven't mixed on a Sunday for many years, so it was great to give it a try again.

With that in mind, my comments may be a little slanted this time. I was focused on my detailed responsibilities and not so much the overall production, which Ben and Josh were leading. Ben has agreed to write another Overdrive response to the weekend, so keep your eye out for that in the near future. Nevertheless, I thought I'd take share some thoughts from this Sunday.

This was an unusual Sunday, to put it lightly. We ordained five pastors this weekend. You can listen to the ceremony if you missed it. Here's a reminder of what happened:
Out of the gate, I want to say this: amazing job, everyone. Whatever little mistakes may be bouncing around in your mind from the weekend, each one of you did a wonderful job. We had 20+ slides as well as 5 videos to play, which is significantly more than a normal Sunday. On top of that, I misdirected the video team, and we didn't have the right amount of lead-out time on any of the videos. That definitely made every cue a challenge, yet you executed with near flawlessness.

Two notes from the mix position:
Now I need your help. When I'm mixing, I want to be ultra-critical of the mix, so that we can keep improving in this area. What did those of you in the congregation think of the mix this weekend?

I want to say a special thanks to Josh for taking the time to watch each of the five videos and write down the last two or three sentences of each segment. Having this information allowed us to synchronize lights, video, and sound and get out of each video as smoothly as possible. I want to make this an ongoing practice, especially when we have multiple videos on the same Sunday.

I had only two thoughts for improvement about video on Sunday:

Craig did a great job with the lighting. I noticed that he made one mistake, though. He left the warm downlights on during several of the sermon cues. What's more? I thought it was a wonderful mistake. It added another level of separation between the cool background and the warm front-lighting, making the IMAG video look better. Let's keep doing this each week.

I did wish that the lighting for the charge had been more even. On the videos, and even in the still pictures, the two guys in the middle were clearly brighter than the rest. I think this was a small moment where we missed an opportunity to really excel. You can watch a slideshow from Sunday that demonstrates what I mean.

Your Turn. What did you think of Sunday's ordination ceremony?

Photo Credit: Bryan Fenstermacher
Posted by Dave Wilcox at 10:01 AM

Thanks, Kerrin. Bryant is a great monitor operator. What was good about your mix?

IMO, a great monitor mix is one you don't have to think about. I maybe asked for two adjustments in the beginning. After that I never thought about it, just heard what I needed to hear. Bryant, is the mix master! ;)

>>He left the warm downlights on during several of the sermon cues...
- This was a result of using my eyes to much and not relying on what the lighting board display monitor was telling me.

>>I did wish that the lighting for the charge had been more even...
- This was a result of my assuming that the guys would be more downstage. I attempted to adjust between meetings, but it did not look any better 2nd service. The key here for me is to ask more questions and don't assume!
Craig Tiren

Hey Dave! I thought the instruments sounded clear and well mixed. I wonder if Bob and Brittany's vocals could have been hotter, though. They didn't seem to have a lot of punch and presence in the mix, and Bob's directions about what to sing next seemed a little quieter than I'd prefer for hearing them distinctly. Great job juggling all the handheld switches!

Dave, I thought the mix was excellent. The thing I enjoyed about it was how everything sounded like a band. Normally on Sunday's there is one instrument or voice that is too loud, and that's where my focus goes, but on Sunday it was an enjoyable groups sound. I do have too comments ... sometimes Kenny's voice was a little loud and I would have liked a little more bass. Oh, I forgot, the drums sounded the best I've heard in a long time.

Overall great. But, background music ended abruptly at end of the videos. Instead, it should fade out gradually.

You are absolutely right on that one. That's what I was alluding to when I said that I didn't communicate clearly with our video team. Instead of giving us 5 seconds of black after the music ended, we had 5 seconds of black including the fade in the music. We had to get out of the videos too quickly in order to avoid seeing the main menu after each video.

If you were in the first service, it was definitely worse than in the second. We tried to let the videos run out just a smidge more in the second service.

Because of the room resonance, I've been wondering whether we should notch out around 230-250 Hz in the X-Frame instead of on every board channel. We get that woofy ring on handheld mics as well as the earset mics. We'd have to check the effect on the bass guitar sound, though.

I wonder if Acoustic Dimensions would have any ideas on taming that ring, since they designed the room and the PA system.