Don DeVries preached just his second Sunday sermon at Covenant Life this weekend, called "The Privileged Status of God's People." Please listen and apply.
What else happened on Sunday?
I had the wonderful honor of spending the weekend with some new friends from Four Oaks Community Church of Tallahasee, FL. Josh and Les, that church's worship leader and one of its tech volunteers, were here to observe some of the things you are up to on the production teams.

What did they come away with?
I was so thrilled to have them meet all of you and get to see you at work. Thanks for serving our Savior so faithfully each month. You are setting an example for people you've never met.

Here are my takeaways from the weekend:

The orchestra sounded the best ever!
This is the result of great ideas from two of our mixers. Specifically, the last time that Julie mixed the orchestra, she noted that it was helpful to use slightly more of the strongest player from each part. This helps get more gain and yet maintains the large group sound. Jim took this approach to the next level by placing a Beta98 clip-on mic on each of those "first seat" players in order to get even more gain before feedback. This accomplished two things: When the orchestra was being featured, the ensemble sound was full and rich. However, when the band got loud, he was able to get just that little bit of extra gain from those four clip-on mics to make sure the strings didn't get lost.

We must know when a video ends.
In the first service, the lights came up early and the video transitioned away before the actual ending. Thankfully, Dennis caught it quickly and got the video back on the screen before anyone noticed what happened. However, it did lead Josh to talk over the last few seconds of text that described who would receive the contributions given to the Sovereign Grace Mission Fund. One suggestion: the playback operator (which we didn't have on Sunday, by the way) should know the length of the video and count down to the ending. Give a one minute and thirty second warning, and then c0untdown seconds -- 10-9-8-7... -- to the end, so that everyone knows the exact end moment.

Changing pulpits doesn't work after the introduction of the speaker.
It draws too much attention to the fact that Josh uses a short pulpit and others use a tall one.

Since Ben will be leading weeks 3 and 4, I will be posting thoughts from him later in the week.

Until he finishes his reverb, what did you notice that was great or could be improved?

As a sidenote, Isaac, one of our camera directors, attached all the lens caps to the cameras, so that they don't get lost. Please don't tear these off. Thanks, Isaac, for your initiative in this. 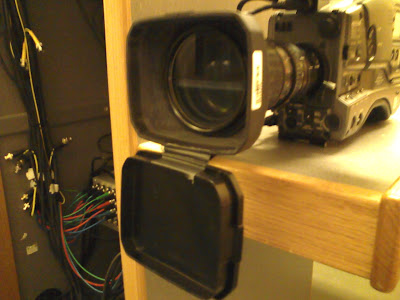 Is it really a problem that people know that Josh uses a shorter pulpit than Don? I noticed this during the service, but I'd think it's probably better to make a pastor comfortable than to worry about whether the congregation knows we have two podium sizes. :)

I'd be curious to know what others think. It just seems to me that it would be less distracting to have whoever is doing announcements use the pulpit that works best for the sermon.

I think we're going to try to use a "medium" sized one for this weekend, when Kenneth and Josh will be going back and forth. We'll see how that works.

It seemed to me that Josh walked around the tall pulpit, standing in front of or to the side of it rather than behind it, a lot of the time. I guess he came up with his own workaround.

When it comes to the pulpit, I think the preacher should be the one who has primary influence over which one is used seeing as they are going to be using it most and, as Dave M. pointed out, Josh walks around enough that it doesn't seem to be a problem to have a taller one out while he's doing announcements.

I did have a question about something that happened during the second service. During the beginning of the message, there was a horizontal bar in the middle of IMAG screen that seemed to be delayed a half a second behind the rest of the image. It was actually a couple minutes before they switched to a different camera and that seemed to "fix" the problem. Since it took so long to do the camera change I wasn't sure if the control room couldn't see what was happening or if it was happening on the other camera feeds and they were trying to fix it. Do you have any insight as to what would have caused that or what was going on during that time?

I personally didn't think changing the podium caused all that much of a distraction.
Josh can work around having the tall one on stage if he's giving post-sermon comments or something, but if he has announcements and notes which he needs to put on the podium and refer to, it would look pretty weird to have the tall podium there.

Personally when it comes to the pulpit sizes, most everyone knows that we have several sizes because what happens when we have a tall pastor introduce Josh. I think it is more distracting to change pulpits just because we are highlighting it (by moving things on and off stage).