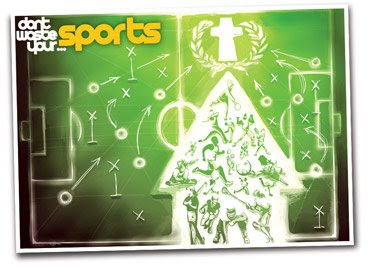 CJ Mahaney wrapped up our latest sermon series this Sunday with Don't Waste Your Sports. If you didn't get the chance to hear to this message, you can listen and apply online.

As a reminder of what the tech teams supported this last Sunday, here is a brief rundown of the service:
This Sunday was a bit unusual due to the matinee performance of Acts that happened almost immediately after the 2nd service. Thanks to the sound and lighting crews for their unusual flexibility in working around the strange setup.

Also, special thanks to the video team, who put in extra effort to get a high-quality recording of CJ's message for Sovereign Grace. I do hope this message gets widely distributed because sermons on sports are a rarity.

The sound team did a great job this weekend, from my limited vantage point. As you will see, I was wrapped up in video issues all morning, so I'm not sure I have the most clear perspective. I only noticed one little glitch: the backup podium microphone was put out for the pastors instead of the regular podium handheld. This caught Dave by surprise because he was expecting the regular one. Thankfully, he caught the change within a sentence. Please make sure to use the regular podium mic (no labels) instead of the backup (with 2-2-2-2-2-2 on it's antenna) at all times.

Lighting was ultra simple this weekend because we tried not to change anything from the play. Thanks, David, for doing double-duty between the play and Sunday to make everything happen smoothly.

We definitely had some video complications this weekend, mostly related to equipment glitches:
On the team operational side, everything went well. We did have a couple instances when the cameras went live to the main screen before the shots were really ready. As a reminder to camera and house directors: make sure you talk about how you will communicate ready-ness. If you are a sub or working with another who is a sub, please meet ahead of time to discuss your normal practices and how you will communicate with each other.

One little thing came up as a result of the special sovereign grace recording of CJ's message. The detail is known as safe area in the world of television video, and it is something we don't normally deal with because our video screen does not overscan.

Overscanning is somewhat of a relic of old tube televisions and happens when the cathode ray (which creates the actual tv image) moves beyond the edges of the screen. To make sure that everything a video director sees on his monitor actually translates to the television world, the video experts have identified suitable safe areas for action and for text. You can read more about them and see a picture here.

Because our video projector does not overscan, we normally don't have to worry about the red area, designated as invisible. We simply think of the whole screen as green and use the yellow area as text safe. However, since we were interested in getting the best video recording possible, we had to pretend there was an invisible area of the screen.

The best way to accomplish this is to simply zoom out a smidge on all cameras to allow for a bit more headroom and a little more room on the bottom. It may feel a little strange on the big screen, but people will adjust quickly and it will make for a better video recording.

Thanks, everyone, for serving this weekend. Leave your thoughts and comments here.

*Photo Credit: David Somerville
Posted by Dave Wilcox at 9:48 AM

I was surprised to see that Josh's white polo shirt wasn't washed out. Good job on shading! Dave, wasn't there a dress code for the speakers on account of the limitations of video technology?

On that note, I have noticed too in the past that whenever there are people in the background of a speaker, most camera directors do not seem to see the background "noise" a particular camera take in whereas the other camera would perhaps offer less noise due to its angle of view. Granted, Jeff was introducing the PC students (in the 1st service), so it's not like they are just "background", but the general lack of a dress code for those appearing on stage at CLC do tend to pose distraction for those of us who are easily distracted, even by what would constitute normative attire in the main stream American culture. -TSO

It's hard to find the words to communicate my thankfulness for the planning and work each of you invested to ensure C.J.'s sermon was captured well on Sunday. I know this short-notice project caused a number of complexities and inconveniences, but from what I hear these modifications to the normal Sunday routine (and accommodation to the uncommon stage set) were all handled well.

I am deeply grateful for the role each of you played to think through how to best modify the background for recording, for the work of the camera operators who were asked to film differently than normal, the sound folks, worship team rearrangement, volunteers helping to adjust the set, and a host of others who I'm sure carried extra duties to see this project through. And all this on short notice during a busy season for the Covenant Life audio/visual team!!

So for each of you directly involved--Thank you for your God-glorifying work and understanding!

Thanks for your replies.

Tony Tso, there is an official dress code, but we don't enforce it too strictly because they generally do a decent job choosing their shirts. If I notice a single pastor breaking the rules frequently, I will follow up with him.

As far as people in the background for the PC intro, I definitely see your point. The challenge in those situations is finding that clean camera shot. There is a chance that camera 4 would have a clean shot, but I think even that was likely to be "noisy" at some times, depending on where Jeff stands.

In light of the fact that we want only one camera on Jeff and two cameras on families, the chance of always having a clutter-free Jeff shot is low, and I'm not so concerned about it.

Maybe we should be careful to leave a clear area behind the pulpit center stage instead of try to accomplish it only through camera angles.