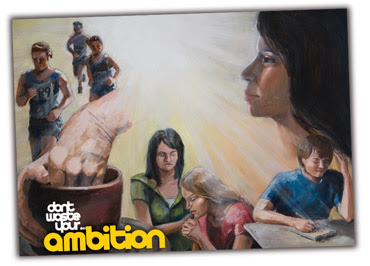 It is time once again for reverb from last Sunday at Covenant Life. We heard a message from Dave Harvey called, "Don't Waste Your Ambition," and it definitely whetted my appetite for Dr. Harvey's (yes, he is a dr!) forthcoming book on the same topic. If you were in Discovery Land or on the video crew, please listen to the message. Even if you heard it already, I'd challenge everyone - and especially the men - to listen to it again.

We should be ambitious for the glory of God.

But Dr. Harvey's message obviously wasn't the only thing that happened on Sunday. Here's a quick summary of the whole service:
As I'm looking over my notes from Sunday, I only have five things written down, so I won't break my comments down in too much detail.
I have a couple all-volunteer notes:
Finally, I do want to note a few things related to lyrics and sermon notes this Sunday:

First, someone I never met tapped me on the shoulder after the first service. She wanted to encourage the people running lyrics because she had absolutely no trouble following when we sang a new song for the first time (The Lord Is). Thanks, Kathe and Dolores, for serving people so effectively. This is one of those areas that rarely gets noticed when things go right, so know that you did an excellent job.

Second, our lyrics folks made two wonderful mistakes. I say that sincerely. These are the types of mistakes I want to see. At one point, Bob said, "Let's sing verse three." And verse three went up (Good!). Then Bob proceeded to quote from the middle of verse three, which was actually on the second slide. Oops. The second part of verse three went up (Good!). Then Bob began to sing from the beginning of verse three. Oops. And the first slide went up again (Good!). This may have looked like a mistake, and it may have felt like a mistake, but I love the fact that they were being proactive to get stuff up early and to follow where Bob was going. Is that exactly the way I would have liked it to go if we had planned it? Probably not. Given the situation, however, I'd rather lyrics operators be proactive and make mistakes than be late consistently. Why? Being late is a mistake every time.

Also, during the first sermon, our folks missed a Scripture reference. The reason? They were taking notes on the application point that just went up. Covenant Life pastors are learning that they can't put a quote or scripture immediately after a main point. No one has time to write down the point before it disappears. I'm not sure if there was any communication about it, but the second sermon was better because Dave Harvey took more time before referencing the Scripture. The lyrics operators got it up that time.

Thanks everyone for serving this weekend! I will be on vacation for the next two Sundays, so make sure to give the Lord (via Ben and Bram) your best efforts these next two weekends.

And please send in your thoughts about this last Sunday by commenting on this post.
Posted by Dave Wilcox at 2:11 PM

These "reverbs" are so helpful, clear, comprehensive, and Gospel-centered. Thanks for helping us use media to communicate God's Word more effectively.

Have a great, well-deserved vacation!

I love following these reverb posts. They are such a helpful picture into the life of your church and a great way for me to look forward to things in our new building. They also encourage me to evaluate, encourage and affirm as well. Thanks!

Thanks for putting in the hard work on these posts. It really helps encourage and envision me for our small team down here in Miami. I've already stolen a few ideas for our team from your posts, but was wondering if you would be able to send me an example of the check lists you guys use? Thanks again!

Thanks so much for 'reverbs'. We're changing sound folk for a sad reason....the last fellow (we have a tiny church) said he was 'tired'... and I think he felt somewhat unappreciated, even though we all believed the Lord called him to the position no amount of coaxing could make him stay....We want to make it MUCH better this next time around, and we have a wonderful brother who is willing to step up...communication can really help between the worship team and the sound crew. Something like you have here would be wonderful...a way to give input and encouragement etc. Thank you so much for your help in setting a model.