What's Wrong With This Picture?

Anyone else notice what's wrong with this picture? Ken and Brittany, you can't answer!

By the way, I took the picture during rehearsal, and I think it got fixed before the service actually started. I hope. 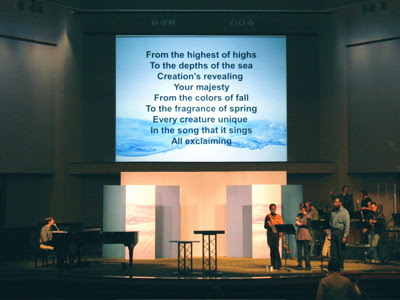 Highest of heights - not highs.

Well, someone caught it. I really do hope that was fixed! :)

wrong lyrics aside....what about having too many words on the screen?

Now there's a great post idea: How many words are too many?

Dave this is way of topic, but what is the thinking behind the slight color variation on the fabric in the seating at Covenant Life?

I'm sure there was some thought behind it, but I don't know exactly what it was. I'll try to find out. I kind of doubt it was anything more sophisticated than "Variety. Cool."

Well, I think you've all missed one thing...how about punctuation? That is a frame of random words, dissasociated and in no logical order without the use of punctuation. It is a run on blob. Is there any reason why the english language isn't valued highly enough that many churches do not employ proper punctuation. Songs are poems. The rules are simple and do not take that much time to impliment. Just because CCLI's website doesn't include them does not excuse those of us who are people of the word trying to communicate God's word and his truths. That's what's wrong. Why does it matter if you miss one word, when it's random. Every word up there is wrong till there's punctuation.
Thanks.
I just think it's important for the church to seek excellence in all things.

P.S. I hate grammer and punctuation, but i think it is very important.

While I ain't speakin English very good I do try to employ proper idea communication when possibly.

No, really, I do appreciate both the English language and your zeal to uphold its rules. I think email and text messaging are ruining the language, and the loss will be great in a generation or two.

(Even as I write, I wonder what rules I might be breaking that I don't even know.)

Nevertheless, we have intentionally chosen what punctuation to include and what to remove from our song slides.

Woops, there's an error, and I didn't even mean to do it.

Hey, I should do the "What's wrong with this picture?" type thing more often. I've gotten several good topics out of it.

I firmly believe that if one is willing to criticize the work of another, that person should also be willing to post their name or at the very least, directly address it with the person in a private forum. If there is such a serious problem with the English language on your powerpoint/media shout, volunteer to aid in the resolution. Might I mention that "anonymous" used an incomplete sentence in their post and I really didn't have an issue with it because it is in a casual setting. Consider being a part of the answer, not an addition to the problem. Criticism only wears out those working for the Kingdom if you cannot back it with a way to help out. I think you should do your very best and serve at every opportunity while edifying those who often only hear the criticism and never the positive. Minister to the Minister folks! Sincerely, Jill Neyhart (wife of a Minister...who loves it with all her heart)

Hi David,
My Name is Tom and I am a worship minister. Does sound volume seem to be a constant issue for you. I am under fire for the volume being to loud in our contemporary service. We have our contemporary service in our gym and it seems to always be an issue. I even had the room re-EQ'ed this week and still came under criticism for it.

Since this is a bit off-topic for this post, can you email me at dwilcox@covlife.org? I tried to find your email at your blog, but I didn't see it immediately available. Sorry about that.

A few questions to kick off the email discussion:
1. What do you mean by "issue" in the question, "does sound volume seem to be a constant issue for you?"
2. Do you know how loud in dB you are currently running in different areas of the room? What are those measurements?
3. Are you using floor monitors or in-ears/headphones for the musicians to hear each other?

Hey, the topics of how many words are too many and how much punctuation should be used would be great topics. I hope you do touch on those in the future! We do have discussins about punctuaction at our church. Actually it's mostly my mother-in-law (bless her!) that makes a big deal out of making sure things are punctuated. I personally am not sure which way is better.

hmm..I'm about five months too late on this but my two cents worth of input would be:

too many lines (words) on the screen.

I've been creating media presentations for worship for seven years and I try to keep it to four lines of text per screen. It may not always be possible but that's my goal. There always seems to be a pause after the fourth (or so) line which would enable the person running the media presentation to transition to the next screen.

(and yes, I saw the "highest of heights" as well. way to go anonymous - getting it right so quickly!)